The next day, after breakfast.

Three people were gathered in my room.

“W-wait a moment. Give me a little more time to prepare my heart.”

Silvia and Eko appeared to be a little apprehensive. Well, I don’t blame them. After all, they were made to crawl on the ground yesterday under that overwhelming power.

The spirit shouldn’t be able to go against me. That’s why I somehow feel relieved, but the girls don’t really understand that. And even though I explained it several times at breakfast, I still couldn’t erase their anxiety.

Still, there’s one thing that bothers me. And that is, even if Angolmois won’t go against me, it might still be hostile towards Silvia and the others. And even if I order it “Don’t be hostile towards them”, I’m not certain it would follow that command. At least back in Mobius, it was not possible to give such a command. I wonder what will happen.

Silvia said while gripping the Bow of the Blazing Wolf. Does she mean to use force if an emergency happens?

Eko is quite easy to understand. If something happens, you plan to protect yourself behind the Shellrock Shield, right? But, why are you hiding even before I summon it, with only your ears poking out behind the shield?

Whatever, let’s summon it.

The summon formation was deployed at the center of the room. Unlike the huge circle that appeared the first summon, this was a small formation about two meters in diameter.

Angolmois was angry as soon as it appeared. And by taking into account that incredible appearance, that anger sure was compelling. Proof of that was the three girls completely hiding behind the shield.

“Ahh, thanks for coming out the normal way.”

For the time being, I just thank it. It would’ve been troublesome if a storm and that huge arm appeared in such a small room.

“……It couldn’t be helped, since I was asked to come out normally the next time.”

It said while looking a bit displeased. Are you sulky? This might be a surprisingly honest guy.

“More than that, I would like an explanation. Why was I unsummoned right away? Weren’t you in need of my great power? “

“No, right now I don’t really need it. However, eventually I will do so.”

“Actually, my Second…… isn’t your treatment towards me a bit rude? I am the Great Spirit King, you know? The great king of spirits that reigns at the top of all spirits. “

“So what? I am the number one in the world.”

“What!? So, my Second is such a remarkable character!? I see, I see, hahaha! As expected of my Lord, to have the spirit ruling over all spirits! “

Whoa, so easy to deal with. I wonder if this spirit would be the ideal target for those “ore ore” phone scams?

“By the way. I was just wondering, are you a man? A woman? How old are you? How should I call you? “

So, nothing really matters, huh?

“I see, got it. I’ll call you Angolmois. Also, let me introduce you to my friends.”

“The friends of my Second!? The number one friends in the world, interesting.” 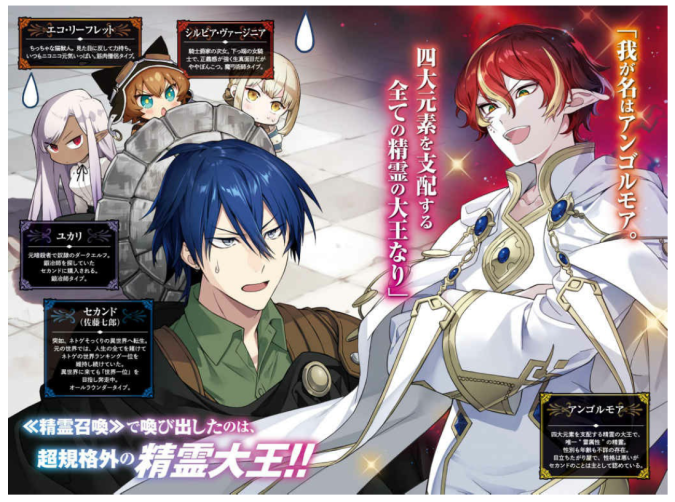 Feeling a bit scared still, Silvia and Yukari came out from behind the shield. Eko was just listening while poking her head out the side of her shield.

“From the left, they are Yukari, Eko, and Silvia.”

“Hoo…… I understand. Silvia is an expert archer. Yukari has a good arm for Blacksmithing. And Eko handles the shield. Truly, a very balanced team.”

“Why do you understand that? “

Is information being shared continuously?

“Angolmois. Who is the first emperor? “

For now, I tried to test it. But well, there’s no way Angolmois would know――

“Hahaha! I understand, my Second. You want to say that I’m a genius when compared to the First Emperor! But I’m still inferior compared to my Second. No, inferior to the one who used to be called Seven, y――”

It somehow didn’t end up in something serious.

Seeing the three girls with question marks floating over their heads, I was probably just barely safe.

After taking a deep breath to calm myself down, I used 《Spirit Summoning》 again to call Angolmois.

“Don’t unsummon me so suddenly! Were you that surprised!? “

He was angry again.

While ignoring him, I desperately began to think “Don’t reveal that information about myself”.

……I see, so this sort of self-consciousness system can be used in such a way. What a shitty system.

“You too, try thinking of something.”

“（Hoo! This is a very pleasant feeling.）“

“（Yeah, I feel the same. I wonder what this is, this sense of togetherness.）“

Fumu, fumu fumu…… Isn’t this nice!? Way too good. With this, the range of tactics can be greatly expanded. A communication system that didn’t exist in Mobius, and Angolmois, the Great Spirit King, will be of great help on the road to become the world’s top. I can feel the tension rising.

In particular, Angolmois is the rarest of all spirits. In the spirit’s evolution system, the final strength of a spirit is adjusted so as to not make a big difference between them; however, Angolmois has a characteristic that brings him a level above the others.

And that is, his 『Lightning Attribute』. A testament of the great spirit who controls the four major elements. In Mobius, it was said that the Lightning Attribute was non-elemental. And Angolmois can unleash an attribute attack that deviates from the absolute rule of correlation of 「Fire＞Earth＞Wind＞Water＞Fire」 that exists between attributes. Specifically, it deviates in the way the attribute that has the advantage deals 1.25 times the damage, this one does 1.1 times the damage equally to all attributes. This is a huge advantage. And there is no attribute it is weaker than. You can even call it broken.

And probably because of this “sense of togetherness”, I can now understand how to use Lightning Attribute Magic.

“（No wonder. Our affinity must be that good.）“

I don’t think this is an issue that can be explained with such simple words…… Not that I really know the reason.

“Haha, hahahaha! （We’re going to get along just fine!）“

“Hahaha! Haahahahaha! （It is just as you said, my Second!）“

At one point I was worried about what would happen, but I’m glad I was lucky enough to draw Angolmois. Hopefully, as time goes by and they go along together, all three members of the team will relax.

“Telepathic communication? I’ve never heard of a spirit having such a skill before……”

Thus, with the addition of a new comrade, the daily life of team Firstest starts again.

A while after that.

I was forced to unsummon Angolmois since he was starting to get hyped up, and after the room got quiet again, I spoke about the events of last night, then Silvia turned into a broken record. Even though it’s pretty funny to watch, I’d love if she could stop since Eko imitates her.

“O-of course I don’t! But speaking of the Lumberjack house, there’s nobody who doesn’t know about the “Woodcutting Earl”. “

“The commercial city Leñador was originally a thriving forestry town. It is reputed that thanks to the skill of the Lumberjack family, it became such a big city.”

Yukari gave a supplementary explanation. I see, so that’s where “Woodcutting Earl” came from. Yeah… Lame. The more I hear it, the lamer it is.

“But that’s not all. At their roots, the Lumberjack house has been known for their martial arts. It is rumored that the present head of the family, Earl Barel, is a sharp and able person who’s accomplished in both literacy and martial arts. In addition, I heard that the son and daughter are quite the adventurers.”

Eh! Are the eldest son and daughter of an Earl house adventurers? It’s quite a liberal family.

“The older brother, Jerez Lumberjack seems to excel in swordsmanship. Seems like he’s a good match with the First Prince, Klaus Castall. And the sister, Chérie Lumberjack, she is……”

Yukari stopped her words almost as in suspense. Her expression was somehow painted with an unusual mischievous smile.

Then, her mouth opened slowly.

“――It’s just, I heard she is called a “Genius Spirit Summoner”. Master.”