One day after arriving at the town city Koula.

Leaving early in the morning, we traveled for a whole day and finally returned to the town of Pae Ho.

“It took you too long! What were you doing!? You had me worried! “

Silvia’s mood, which I met now for the first time in about a week, seemed to be reaching dangerous levels. But I somehow managed to avoid the worst case……

Since before that, Eko came running and hugged me. I patted her head as she was rubbing herself onto me. She’s totally like a dog. Even though she’s a cat. 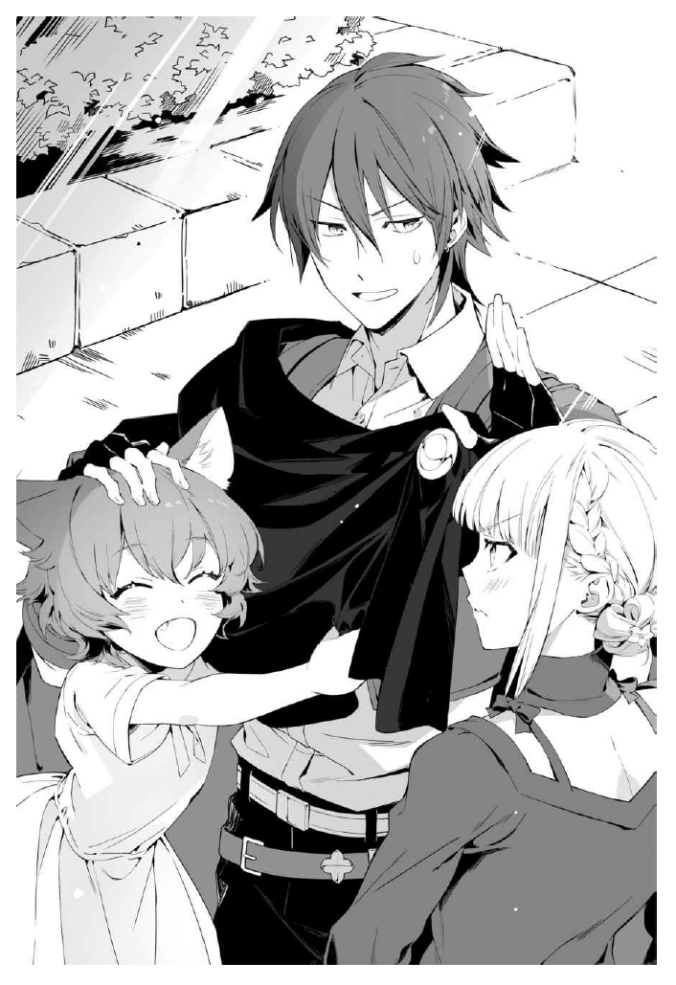 “Sorry, sorry. Did you have any problems? “

For now, I decided to simply apologize.

“Don’t ‘sorry’ me! It was full of problems! Do you know how many times I wanted to communicate!? “

Her mood got worse.

Uh oh… Since it would’ve been troublesome, I told her “Don’t contact me unless it’s an emergency”. I thought that since there was no contact, there were no problems here, but it seems like something big happened.

Silvia cut off her words as if she had noticed something. At the end of her gaze was Yukari’s figure, standing diagonally behind me.

The two people silently stared at each other. It looked like the two of them were trying to communicate something by letting their eyes do the talking. But I wonder, why does the air suddenly feel a bit tense?

“……Alright, let’s have a little ‘girls talk’. Second-dono, wait for us, we’ll go over there for a moment.”

Without time to argue, Silvia took Yukari and Eko and began to speak secretly.

I could occasionally hear Silvia’s passionate voice, Yukari too seemed a bit hot-blooded, which was a rare view, but apparently the three of them were having fun chatting. I wonder if that is what’s usually called a girls-only gathering​. Ohh, so a girls-only gathering can emit such a thirst for blood, who knew?

“Hmph, but the time we’ve been together is more.”

“Doesn’t that only mean that you’ve been together, yet you’ve made no progress at all? “

Ahh, they’re already at the friendly-fight phase. It’s nice to see that things are going well even with the addition of Yukari.

Eko came asking. Indeed, what should we do?

“Since it’s already evening, we’ll not go to the dungeon today.”

She seemed a bit disappointed. I wonder if Eko likes the dungeons that much?

“That’s right, let’s come up with a plan while we have dinner.”

While saying so, I started walking to our usual inn.

With an “Okay! ” Eko held my hand and walked by my side. Behind us were Silvia and Yukari who were still arguing.

And like this, our new daily lives have begun.

“It’ll be all about earning experience points.”

I declared a simple and straightforward strategy.

The slightly tipsy Silvia then merrily opened her mouth.

Looks like their relation is already at the no honorifics level. That’s nice.

“We will earn experience for Yukari until her Blacksmith skills are Grade 9. After that, she’ll devote herself to blacksmithing.”

“I give you my thanks in advance.”

Yukari expressed her gratitude while feeling a bit apologetic.

Silvia then poured some wine into Yukari’s glass and said “Don’t worry”.

“By the way, Master. Have you decided on the team’s name already? “

After pouring wine into Silvia’s glass, Yukari then poured some in my glass and asked.

The team’s name, huh? I totally forgot about that because of the stupid teleporting incident.

“No, I still haven’t decided on one.”

I got a pretty good grasp on Silvia’s naming sense with the brown White Silver horse. I really can’t hope for much from her.

“Well, Silvia-san, could you let me hear it instead?”

“Umu! Since I’m a knight who has sworn a blood oath――” (TLN: “Knights of the Blood Oath” SAO reference.)

Close! I’m not sure why, but that was close!

“……Uhmm, we are not knights, so isn’t that a bit inappropriate?”

Silvia felt a little depressed since she thought her idea was good. “Then, how about ‘Knights of Zero’? ” When she said that I shut her up by making her drink wine. It’s finally getting dangerous.

“Then, how about this one?”

“Ｓ from world’s top (Ｓekai), Ｏ from greatest achiever (Ｏoini), and Ｓ from Second’s brigade. Or, ‘ＳＯＳ brigade’ for short.”

Do they have a grudge against me?

So, I have no choice but to decide myself, huh?

“Hmm…… Alright. I’ll go with 『Firstest Team』. For now, this will be the name.”

I’m not sure if such a word really exists, but that’s to emphasize the “first”, and it makes it easy to understand that we will be the “world’s number one”. That is the perfect word to express the desire of becoming the world’s top. I can also boast since it’s similar to ‘fastest’. (TLN: Firstest and fastest in Japanese katakana read pretty much identically.) It has a nice sense of speed.

“Isn’t that…… the most embarrassing name of them all?”

“It’s fine. I’ll be the number one in the world anyways.”

And so, in a drunken moment, the name of the team was decided. Well, it seems like about 80% of such names are decided in a tavern in this world. Let’s not mind it much. What’s important about it is the momentum, the momentum indeed.

“What’s important is to become the world’s number one. Not the name. You understand? “

Said Yukari as she skillfully poured more wine. Although with an inexpressive face, she interjected.

And thus, the night ended.

After making Silvia drink a Detox potion to help her with her headache, we headed to our usual intermediate rank dungeon, the 『Limptfert Dungeon』.

Even after all this time, the Limptfert Dungeon is still good. What is good about here you might ask? The nice amount of experience and the easiness to beat the enemies. At this pace, maybe not even a month will pass before Yukari’s Blacksmith skills reach Grade 9.

I decided to take a peek at the person.

Yukari was speechless at the sight before her.

She showed a rare trembling expression.

I suddenly remembered. I have yet to confirm Yukari’s skill ranks.

I took a peek at Yukari’s skill section using the Team Leader privileges.

I get it. And what’s more, how lucky.

Among Yukari’s skills, only two have reached Grade 1, from 【Archery】 《Soldier Archery》, and from 【Assassination】 《Knight Assassination》. Everything else was at Class rank. Thinking carefully, being an assassin didn’t mean that you would always face against clever adventurers or powerful monsters, so maybe it wasn’t necessary to have high skill ranks in order to function properly as an assassin.

This is a surprise. She probably was surprised since she didn’t think that I could defeat these monsters with such ease. Well, high ranking skills are this powerful after all.

But rather than that, what was lucky was Yukari’s ‘growth potential’. Since her skills weren’t raised as high as I had expected, it will be way easier for her to earn experience. Rather than a month, it seems that like this, she might grow to become similar to a second-rate Blacksmith in just a couple weeks.

“Yukari. As you grow into a Blacksmith Master and make powerful weapons and reinforced equipment, you too will be able to clear intermediate dungeons, and even upper-class dungeons. Being the top of the world is getting closer. I’ll be counting on you.”

When I told her that, Yukari replied with a “Certainly”, and bowed beautifully.

“Me too, I’ll aim for the top together with Master. The top Blacksmith Master.”

After hearing her say that with a big smile, I really thought ‘It’s great to have friends’ from the bottom of my heart.

Next chapter is an Idle Talk.