I decided on the spot to buy the dark elf crime slave.

The price was 16 million CL. To have an excellent future Blacksmith Master at this joke of a price, this world is beyond saving.

“Then, I will start with the slave contract.”

Saying that, Phillip took out a piece of paper. It was a contract used for slavery magic. I’ve seen in before in Mobius. It’s used for master-slave contracts by the force of slavery magic, it makes the slave unable to take any action contrary to what’s indicated in the contract. It’s not a problem of whether the contract could be broken or not, since there’s this mysterious compelling force that makes it “unable to be broken”. Well, the truth is, there are many tricks to breaking it without penalty…

By the way, slavery magic was a unique skill specific to certain NPCs that appeared several times in Mobius, but lacked usefulness as the story progressed. Of course, that NPC was not Phillip, and players weren’t able to learn it. In other words, there’s a new and unknown set of conditions for acquiring NPC specific skills, meaning that there are multiple people who can use NPC specific skills.

“Are these contents alright for the contract? “

Oops, I almost didn’t read it. Let’s see. The following contract is made between the master and the slave (hereafter referred to as A and B respectively). Number one, it is the obligation of A to provide B with the appropriate clothing, food and shelter so that it does not harm their dignity and life as a person…

…Oh, I see. I just gave it a quick read, but in short, “The master must treat the slaves humanely and the slaves must be obedient to the master”. Quite the decent content.

There’s only one point of concern. And that is this last item added.

『Number nineteen, B can not take any action that results in harm against another person.』

Geez, that’s quite tough. It’s true that she might be a former assassin, but if she was to be attacked by someone, she won’t be able to even defend herself… I’ve got no words.

“Is there nothing you can do about this? “

“No. That was an order from the country, so…”

Phillip answered while having a bitter look.

“Well, it can’t be helped. Then, the contents of the contract are fine as they are.”

Since it’s limited to “persons”, earning experience by attacking monsters should pose no problem. She should be able to attack them.

While reluctantly consenting, I signed the contract. The dark elf slave also signed it.

After Phillip confirmed it, he activated the slavery magic.

I felt something invisible between me and the dark elf being connected. Quite a new feeling I must say. Her eyebrows also twitched slightly.

“With this, the slavery contract has been completed. Thank you for your purchase, Second-sama. I look forward to seeing you again here in the Maurice Company.”

The contract ended easily and without problems.

After being freed from her chains, the dark elf simply stood silently behind me.

I wonder why? This feels terribly awkward.

Seems like she didn’t understand it as a joke. On the contrary, this dark elf has a look of disgust. She sure has guts for being just a slave.

……Still, no name, huh? What kind of life had she lived?

“I was kidding. But in that case, it will be hard to call for you. May I give you a name? “

Folding my arms, I kept thinking for about five minutes and then decided on her name.

“How does Yukari sound? “

After hearing me, she just opened her eyes slightly more and looked at me.

“Understood. My name is Yukari. Thank you very much, Master.”

Yukari made a beautiful bow.

It was such a beautiful movement that I almost bowed back involuntarily.

Even though I was slightly shaken by receiving the word “Master”, I turned my back to Yukari so that she didn’t notice it and hurried back to where Silvia and Eko were waiting.

Yukari came quietly, following behind me. I guess I should say, as expected of a former assassin, I can’t even hear her footsteps.

After returning to the reception, Silvia said so as she greeted me back, but her words stopped the moment her eyes matched Yukari.

“……Second-dono. Can it be that this beautiful dark elf lady is?”

“Yeah. She’s Yukari. From today, I’ll develop her as a Blacksmith Master.”

Silvia collapsed on the spot. “I never expected a woman blacksmith”, “Why didn’t I consider that possibility?” and “What’s more, they are huge! “, those were some of her mumbles I somewhat managed to hear.

Looks like her Ekomunication skills are quite amazing. However, Yukari is also amazing by remaining composed and not changing her expression while having that exchange.

“That there is Silvia. She’s a great Magic Archer.”

I began with the introductions. Yukari asked “Magic Archer? ” while tilting her head, to which I just answered, “You’ll see in time”.

Then, after buying Yukari’s horse and clothes, “Let’s go back to the town of Pae Ho. Then, we’ll have a meeting about the future plans.”

And along with my voice, we left the Maurice Company.

……At first, I thought she was just nervous.

But it was different.

On our way to the town of Pae Ho, I tried to talk about various subjects in order to deepen my friendship with Yukari.

Nothing I said ever worked.

No matter what I said to her, Yukari remained expressionless and answered with a plain and business-like voice.

Not only with me, it was also the same when she talked to Silvia and Eko.

Is she trying to kill her own feelings?

I don’t know her origins.

It was only at the “none” joke I did that she showed some sort of emotion.

That look of disgust――In this half a day we’ve been together, that has been the only time I felt an emotion from her.

In the first place, I’ve never been really good at communicating, so I’m already at my limit.

She might be a slave, but still, she is a new companion. If possible, I’d like for us to get along.

If we don’t have a good relationship, she might go away later when she becomes an excellent Blacksmith Master.

I wonder what I should do? …I kept thinking.

Then, in the end, all I could think of was this.

Let’s hear it straight from the person herself.

“Yukari. Can you tell me about your past? “ 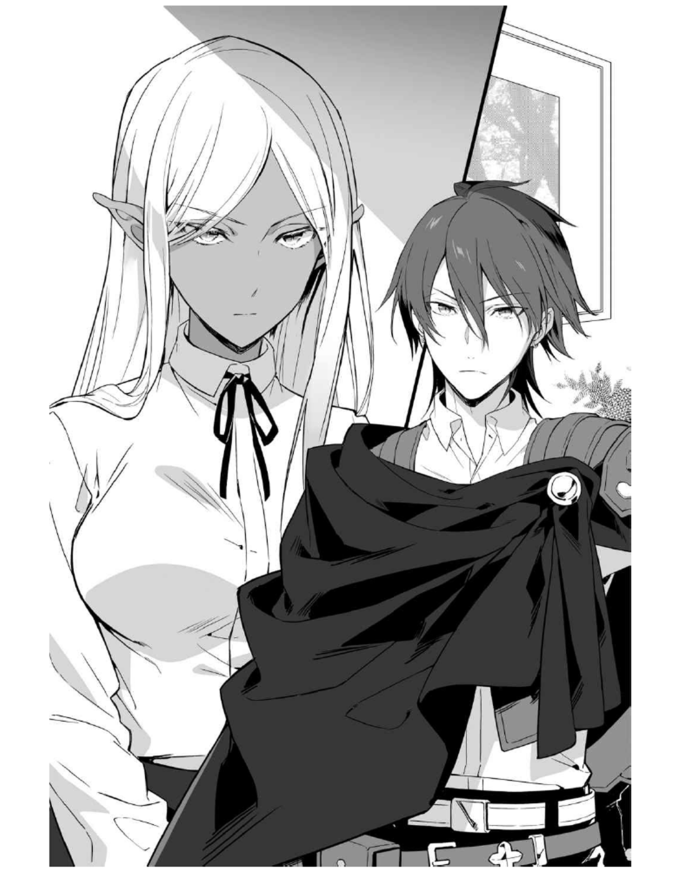 As soon as we arrived at the inn, I called Yukari to my room.

Yukari answered my question with a really cold voice.

Her eyes were shaking slightly.

“…Then, allow me to remain silent.”

I was refused. Flatly rejected.

Still, I pretended to be calm and said, “Is that so? In 15 minutes we’re having dinner, you can go back to the next room”. she then left and returned to her room.

It was really a short conversation.

Oops, I accidentally leaked a smile.

Still, I didn’t think I would get such a nice harvest.

Due to my straight-up out-of-nowhere question, Yukari showed the most emotion to date.

That was, unrest, a bold front, guilt, and…… fear.

There is something in her past. That’s why she doesn’t speak much and acts like a mild slave. And what’s more, she’s “scared” of that past of hers coming to light.

As for the reason for hiding that past―― It is probably related to the time she was acting as an assassin.

But that I already know. She should also know that I know.

About the time when I was the top in the world. “Seven, what do you do for a living? ” When I heard that question, I remembered having a similar feeling to how Yukari acted earlier.

I didn’t want to tell the truth. Therefore, all I could do was lie. I always answered with “Real Estate” when they asked me.

Why was I hiding it? Because if not, the delicate relationship we had would break. If they knew that I was unemployed, they would always see me with scorn in their eyes. I was scared of that. Therefore, I always kept my distance with others. I was always acting. My act of “Since I have the money and the time, I decided to have fun and become the top in the world.”

……Yukari’s reason probably isn’t so light. However, there are parts in her that are similar to me. Specially that part that looks away from the reality.

“There’s no way I’ll get accepted after revealing the truth”, she should be thinking along those lines.

“Betting your life in an online game, you say? That is amazing! “, I gave up thinking someone who would say stuff like that existed.

That being the case.

What should I do to have her come out?

Convince her and make her think “If it’s these people, they will definitely accept the past me”.

That will be hard.

Quite hard, but it’s worth a shot.

Along with a shout to motivate me, I stood up.

In any case, right now is dinner time!