Isis, the consul regent girl waited for Yamato in the alley in front of the inn. 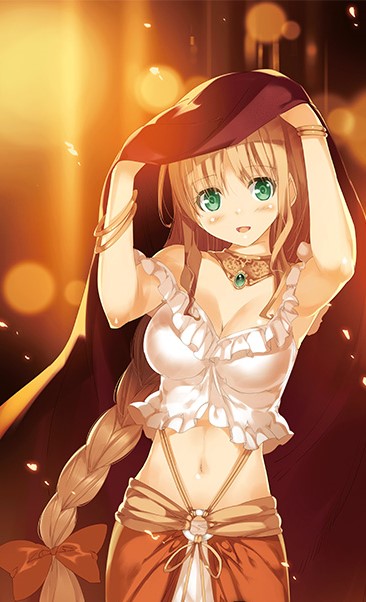 “Coming alone at this late hour… no, I guess you do have an escort.”

“Yes. I was scolded for trying to come alone…”

The girl waited in the darkness, but she was not alone.

In a place not far away, there was an escort knight.

It was one of the knights who rushed towards the mansion’s room the other day, Yamato recalled his name was Lienhardt.

“Lienhardt is one of the strongest knights in this part of the continent, even earning him the title of 《Ten Swords》. I really trust him.”

Even in Yamato’s amateur eyes, the man called Lienhardt was of considerable skill.

Their age shouldn’t be so far apart, but Yamato could feel the dignified air of a battle-hardened swordsman in him.

Of course, himself being neither a swordsman nor a knight, he felt no need to compare himself with that person any further.

“Sorry for coming this late at night, Yamato-sama.”

The current time could be considered late.

After all, in this world without electricity or artificial lightening, night truly came as soon as the sun was down.

Yamato remembered the story he heard from the glass craftsman at the bar, about how this consul regent girl was a hard worker.

So, he assumed that Isis hadn’t come downtown with leisure in mind.

“In fact… I came to deliver the ‘first’ of the ‘three compensations’.”

“Yes, ‘three compensations’ (San ko no Rei)! For the first one… I decided to bring this fruit, it’s one of Orn’s specialties.”

As she replied, Isis handed over to Yamato a bright red fruit.

She explained that this was a fruit she painstakingly cultivated in the courtyard of the Consul main mansion. And it also happened to be a fruit local to Orn and her favorite one.

It appeared Isis had misunderstood Yamato’s words when he refused in a more literal meaning.

She said she would bring ‘Orn’s specialties’, one each day for the next three days.

“I see. But still, I’m not going to become your military advisor.”

“Yes. What I want now is for Yamato-sama to like it.”

“Yeah, this city, I want you to like the city of Orn.”

With a tint of seriousness in her eyes, Isis spoke.

She said she wanted those who came from Urd to enjoy their stay in this city, and for them to get to really know and like Orn.

That would be the best way to convey the charm of Orn.

After being told so with that seriousness, Yamato couldn’t think of it as a joke.

“You say some strange things, don’t you?”

“Anyway, its already late. You should go back.”

Even with her knight escort, she was still the consul regent.

And especially now with the situation being delicate, going outside at night was probably not a good idea.

Yamato felt he shouldn’t be taking her time at this hour since she would most likely end up working without having enough time to rest.

“Thank you for your thoughtfulness. May I come again tomorrow? Yamato-sama…”

“Understood, thank you very much! “

After bowing her head, Isis happily walked away.

There was no scheming in her actions, she truly wanted Yamato to 『like the city of Orn! 』, that he understood.

Oh god… it feels like this is just the start…

He questioned how could he, who was quite bad at socializing, deal with this kind of girl.

Quite an angry voice called out to him.

Its owner was Lienhardt, a knight in service of the Consul. He didn’t pull out his sword, but his killing intent was as obvious as the day.

A hostility directed at Yamato, after her lady master went out of her way to visit this person.

But since Yamato had no ulterior motives nor any feeling in particular, he could only think of ‘please, spare me the trouble’.

“There’s no need for you to accept me.”

While ignoring the knight, Yamato went inside the inn.

Geez… weak to some cheap provocation, aren’t we…?”

Lienhardt might stood as a top swordsman, but his mind was still immature.

Those who couldn’t remain calm would certainly fall into a dangerous situation one day, or at least that’s how Yamato felt. Especially taking into account the current situation they were in.

At the entrance of the inn, the village chief’s granddaughter, Liscia welcomed him.

She had felt the signs of people outside and woke up as she was sleeping with the children.

Armed with her Marionette Bow, she waited ready to act just in case something happened.

Her senses were sharp. She obviously sensed the presence of the girl Isis and the knight Lienhardt.

“That ‘woman’ just now, she had been waiting for Yamato-sama to return for a while now.”

Isis quietly waited for Yamato to return, since he had gone out drinking and wasn’t sure when he would return.

Liscia worried since she saw her wearing quite a serious expression, and also because she was of the same sex.

“It’s fine. Tomorrow is a day off. You should take it easy and rest, or go shopping and sightseeing, Liscia-san.”

Yamato worried about her.

If he wasn’t clear about it, the dedicated Liscia would probably use the day to do some kind of work.

After all, the Urd stall at the bazaar would still open for a few more days.

To Yamato, this was a great opportunity for Liscia to refresh her mind and body as she rested.

“T-tomorrow… please go shopping with me.”

“Really!? Thank you very much.”

And so, during tomorrow’s day off, Yamato decided to go alone with Liscia out shopping.