Episode 64: Towards the Imperial Capital

A cobble-paved road extended from the east to the west all across the continent.

It was one of the many paved roads throughout the continent, laid by the ancient “super empire” by employing a large number of slaves.

From the fertile lands in the west, special products such as cereals and spices were brought in commercial caravans to be traded in the east.

And on the other side, from the east, where the land was poor, metal ore and processed goods were transported.

This historical highway had been the cornerstone of goods distribution in older times, and even today it played an important role as connector between the different cultures.

And in that highway, a group was traveling, heading east.

There were several wagons in the center and a cavalry escort surrounded the caravan.

People who saw them would arrive at the conclusion that it was likely to be a farmer or merchant from the mountainous region, judging from the traditional clothes they wore.

The wagons were packed with rare and special products, so their destination was probably the imperial capital just ahead, where they would sell them.

This merchant group seemed like any other that came to do trade, so other merchants and travelers they passed by felt unsurprised, since it was a common sight.

Even thought, the horses being rode by the escorts and the ones pulling the wagons were the famous Han horses, and also regardless the fact that, most of the members of the caravan were young children.

The disguises of that group ――of the Urd trade squad, was perfect.

“Yamato-ani-sama. A bit further east from here, there was a big city.”

“Thanks, and sorry to have you scouting, Kuran.”

The scouting unit led by the Han clan girl, Kuran, returned to the wagon which Yamato rode.

They also reported no suspicious individuals were sighted at the road ahead or the surroundings.

But even with that report, while holding the reins of the leading wagon, Yamato told everyone to still keep an eye on their surroundings.

“The imperial capital, at last Yamato-sama.”

Sitting next to Yamato was Isis, whom after saying that, changed to a serious expression and tightened her hands.

Although in disguise, she was responsible for the diplomatic delegation of Orn.

After arriving at the imperial capital, she had the duty of conducting the secret negotiations with the empire, and there was no way of predicting what would happen.

The ride from Orn and up to that point had progressed smoothly and without incidents.

An ordinary trade caravan would have to stay lodged in a border town or city for several days, and spend several more days to reach the imperial capital.

But thanks to the trade permits issued using the power of Isis, the international border check was quick and without a problem.

If not for those permits, it would have taken more time.

“Yamato… the imperial capital is not like Orn. Let’s be careful.”

Yamato replied to the advice given by the Knight Guard Lienhardt.

Disguising himself as a mercenary escort, Lienhardt was hiding his identity as a Knight Guard of Orn.

Yamato remembered that Isis and Lienhardt were the only three in this group that had experience traveling to the imperial capital, the third one being the old blacksmith Gaton, who was experiencing motion sickness in wagon, next to the cargo.

Therefore, he planned to rely on them for information and as their guide.

“I’ve been to the imperial capital too! Yamato-danna! ”

“Ahh, that’s right. I forgot you were here.”

By the way, the noisy Lacq in the back had also experience traveling here.

Lacq should be the person responsible for the Urd store, taking care of it.

But, after leaving instructions about what to do in his absence to the employees, he came following after Yamato’s group.

Still with his frivolous image, the instructions he gave were, surprisingly, quite adequate.

And above all else, Yamato trusted him and the employees he had selected for the store.

And just the same as usual, Yamato felt he has as many secrets as he had skills.

“Don’t be, it’s my first time too, after all. Liscia-san”

Next to Yamato was Liscia, sitting in the driver’s board, smiling lightly as she replied.

The largest in the continent, the imperial capital, was a place of unease for the northern people.

And also, sitting next to Yamato in the driver’s board, opposite to Liscia, was Isis.

Objectively, it was too small of a space for three people to sit on, but Liscia vehemently refused to sit somewhere else.

“I heard the imperial capital is very very big! ”

The children of Urd were, as usual, chatting in the back of the wagon with those innocent smiles on their faces.

Yet, they were wary of their surroundings, never acting too careless.

Incidentally, a few of the elite children were among the members brought in this trade group.

Being responsible for the trade group and the wagons, Liscia and Yamato had selected the children that would be coming.

The escort cavalry consisted of Han clan children led by the girl Kuran.

And also, some of the Suzaku children, who were rescued from the slave merchant, were chosen to accompany them.

(The village should be fine…)

The remaining people were tasked with the usual jobs of patrolling and defense.

Recently, there had been no danger around the village, and with the inahon planting finished, Yamato thought the village should be safe with just the people left.

The trip between the imperial capital and Orn amounted to a good number of days, but still, Yamato wasn’t worried to leave the village for a while.

After that, a little further west in the road.

“Yamato-ani-sama! I can see the imperial capital.”

A report came from the scouting party led by Kuran, and at the same time, the city could be seen in the distance, appearing over the horizon.

The largest city in the empire, the imperial capital, had finally come to sight ahead of them.

(The imperial capital… it kind of gives off an unpleasant “air”…)

Yamato murmured in his mind as he started to see the grey walls of the imperial city in the distance.

Volumes 1 to 13 of Overlord available for international shipping from Amazon Japan. 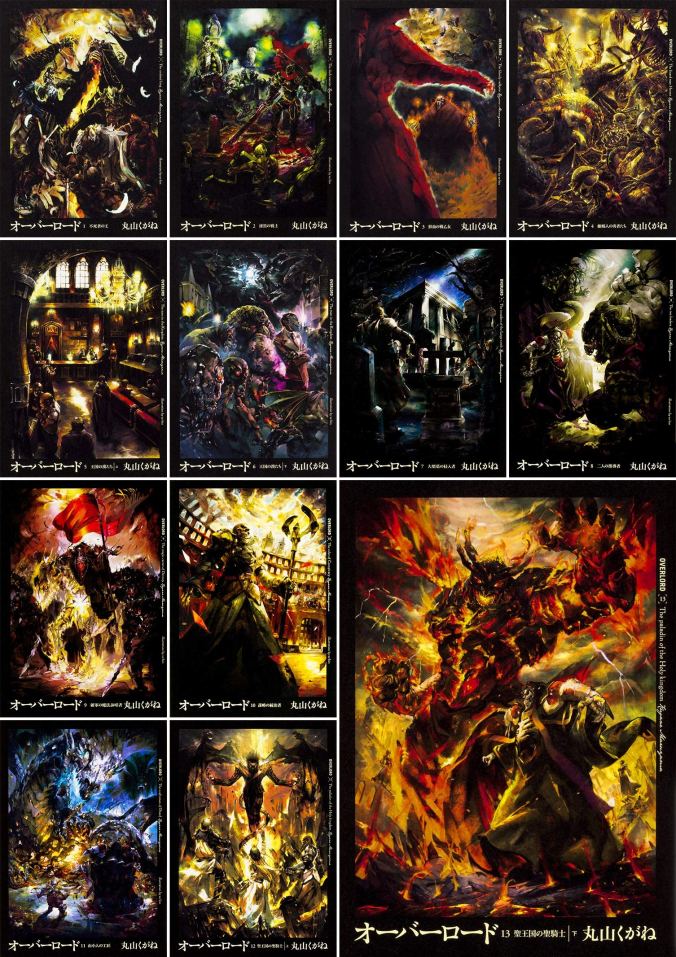